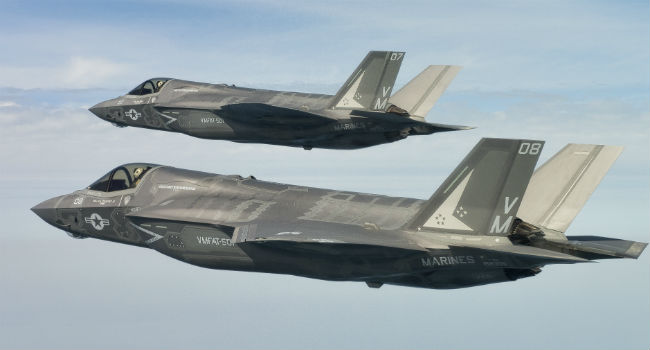 Sometimes you get an opportunity in life that’s so incredible you have to pinch yourself. That’s how two engineering students from Aalborg University feel right now. The Danish advanced technology company Terma is sending 11 Danish engineering students, including two from Aalborg University, on internships in the USA. The students will be working at the aircraft manufacturer Lockheed Martin plant in Fort Worth, Texas where they will help to build the world's most advanced fighter jet, the F-35 Joint Strike Fighter. During the internship the students will work on everything from quality assurance to process optimization in the production of combat aircraft – a once-in-a-lifetime opportunity.

- It is tremendously exciting to be able to work with the most advanced aircraft technology. At the same time, I feel that I’m helping to write a small part of the story since I’m now going to be building the fighter jet that will be part of the Danish air force for many years to come, says Alexander Kamp Nielsen, engineering student in Autonomous Systems at Aalborg University.

Alexander Kamp Nielsen is one of two AAU engineering students who as of January is packing a bag and boarding a plane to Texas.

That it is even possible for a Danish university to send students to one of the world's largest and most innovative workplaces in the defense industry is because of a partnership with the Danish company Terma who has a long-standing relationship with Lockheed Martin and supplies parts for F-35 combat aircraft. Since 2015, the two companies have strategically collaborated on sending Danish students over there to both learn and teach.

For Terma it’s about introducing engineering students to a field that can turn them into potential colleagues later. Should the students decide to continue their careers in aviation technology with Terma, it is a huge advantage that they are familiar with the work processes of one of the very best companies in the industry.

- When it comes to new employees, we need the best of the best, and this is one way to ensure that the best will be interested in our field. At the same time, a stay at Lockheed Martin upgrades their skills to a degree not possible in Denmark or very many other places in the world, explains Thor Paulli Andersen, an engineer in aerodynamics at Terma who in 2015 was the first Danish student to do an internship at Lockheed Martin.

- From a purely engineering standpoint, I acquired a broad technical understanding of the entire production apparatus around the construction of a fighter jet. I was also better able to see how my own work fit in and I got much better at communicating my expertise on several different levels because at Lockheed Martin you have to explain what you're doing to both mechanics and your boss’s boss.'

In addition to Alexander Kamp Nielsen, Lorena Ximena Nigro from the same department at Aalborg University will also go to the USA to try her hand at the F-35 Joint Strike Fighter, perhaps the world's most advanced machine ever.

Specifically, Lorena Ximena Nigro, who is graduating this summer as an engineer in autonomous systems, works with quality assurance in wing assembly. She will both learn from the work processes at Lockheed Martin and also share the insight she has acquired through her studies at Aalborg University.

Thor Paulli Andersen says that engineering students from Denmark are in high demand at Lockheed Martin because they come with a high level of expertise that not many other countries in the world can match.

- We are sending more and more students to Texas every year, which testifies to the fact that Lockheed Martin also feels they benefit from our collaboration, he says.

Lorena Ximena Nigro previously worked as a flight attendant, so the opportunity to go to the USA and Lockheed Martin is a dream come true.

- I love aircraft, and Lockheed Martin is the top. So it’s a great opportunity for me to get to work in a company of such size and complexity, something we don’t have many of in Denmark. Clearly, this experience will feature prominently on my CV, and it will also open doors because I will have worked at one of the best places for quality assurance. When it comes to building fighter jets, you can’t afford to make mistakes, she says.

Wanting to work with large production facilities in the future

Both Alexander Kamp Nielsen and Lorena Ximena Nigro are very cognizant of professional experience. Both students are aware that an internship at Lockheed Martin – that in addition to being among the 200 largest companies in the world also has an extraordinarily high standard in production – will make them attractive to future employers.

- I'm definitely most interested working in these very large companies, and so it means a lot to already have experience from an internship in one of them, says Lorena Ximena Nigro.

Lorena Ximena Nigro actually has a 9-year-old daughter who has to commute back and forth between Denmark and Fort Worth in the five months of the internship. The opportunity and the adventure of the internship was too big for mom to pass up.

Alexander Kamp Nielsen also believes that the stay in Fort Worth will be the benchmark in his career going forward.

- I can well imagine continuing to work with large scale-production apparatuses, for example, in the aviation industry or the automotive industry, and, all things being equal, having Lockheed Martin on my CV looks pretty good, he says.

At Terma, where we hope the engineering students would like to pursue their careers after they graduate, we know that the students in Texas are going to learn something that they can’t learn at the factory in Grenaa or the head office in Lystrup just north of Aarhus.

At Terma they thus see great potential in the students with their experience from Lockheed Martin possibly continuing a career with them.

- Lockheed Martin is one of our largest customers, so it is clear that the better we understand their work and development processes, the better the collaboration can be. The same applies for the students; if they want something in this industry, it's a huge advantage to have worked on building F-35 aircraft, says Thor Paulli Andersen. 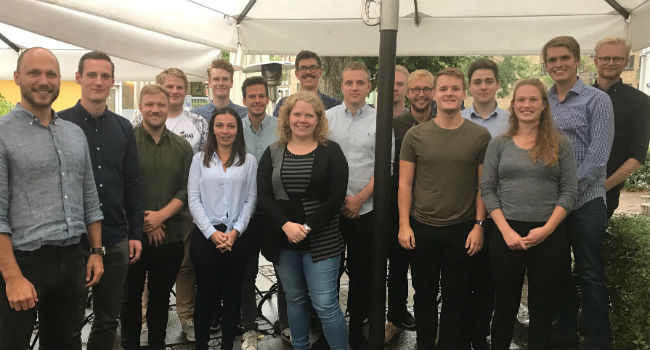 Future interns met former interns from Lockheed Martin at a meet and greet-event. Both Lorena Ximena Nigro (first row, fourth from the left) og Alexander Kamp Nielsen (back row in the middle) participated in the event. Foto: Terma.

Lockheed Martin manufactures the F-35 Joint Strike Fighter which Denmark has bought 27 of to replace the current F-16 aircraft. At the factory in Fort Worth, Texas more than 3,500 fighter jets must be produced; more than 320 have been produced so far. The F-35 is the most advanced fighter jet ever.

In 2015, Denmark sent two engineering students to Lockheed Martin's factories in Fort Worth. That figure rose in subsequent years to 5, 6, 8 and now 11 students who will have a unique opportunity to work at a place where you can otherwise only be employed if you are an American citizen.

The 11 engineering students come from Aalborg University, the Technical University of Denmark (DTU) and Aarhus University.