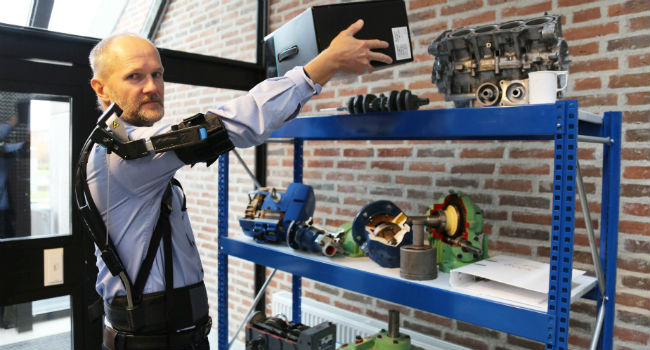 The use of exoskeletons in industry is significantly increasing, potentially reducing the number of work-related injuries and ensuring that fewer workers become physically worn out. A win for the individual, the employer and for society. The topic is on the agenda of the Working Environment Summit 2019 tomorrow where AAU professor and expert on exoskeletons John Rasmussen takes the stage

For several years, exoskeletons have served as an effective aid in rehabilitation, but now the technology is also being used in industry which has discovered the benefits of exoskeletons such as fewer work-related injuries, fewer worn out workers and increased quality of life. Tomorrow, Professor John Rasmussen of Aalborg University will give a talk on exoskeletons at the Working Environment Summit 2019, organized by BFA Industry who counts the Confederation of Danish Industry, the Danish Association of Managers, the Central Organisation of Industrial Employees in Denmark, and Dansk Metal among its members.

- We’re looking at a future with a higher retirement age, a shortage of labour and an increased focus on a healthy working life. So it’s very relevant to focus on exoskeletons as a means of reducing the number of people who are worn out by their work, and thus increasing the number who will be able to continue in the labour market up to their retirement age, says John Rasmussen, Professor in the Department of Materials and Production at Aalborg University.

Fewer work-related injuries and a reduction in the number of people worn out by hard physical labour benefit both employers and society. But this is also essential for the quality of life of the individual.

- A shoulder worn out due to a physically demanding job is equally worn out when the person gets home. The condition will then also naturally influence the person’s ability to garden or exercise. Exoskeletons can help to ensure the physical wellbeing of the individual, says John Rasmussen.

He also stresses that physical pain and limitations can have major psychological consequences, particularly if you are excluded from the labour market for this reason.

- It’s clear that if you’re sick, you’d want to retire. But the vast majority of people would actually like to stay in the labour market if they can - not only for financial reasons, but certainly also because of the social aspect of work, says John Rasmussen.

Among the world's best at predicting the effect

The challenge for understanding the effect of workers wearing exoskeletons in industry is that this can only be done in the long term. Many business leaders will thus be sceptical when faced with the investment in exoskeletons. Fortunately, there is advice on this. The AAU researchers are among the world's leaders when it comes to predicting wear and tear on muscles and joints, i.e., human biomechanics.

- We’ve developed advanced computer models that can predict how much a the strain of a particular lifting motion, which may be repeated hundreds of times during a workday, can be eased by a given exoskeleton. Then we can compare the strain with and without the exoskeleton and predict the effect of wearing an exoskeleton, says John Rasmussen.

The computer simulations are complemented by experiments by research colleagues from the Department of Health Science and Technology who measure muscle activity using electrodes. Together, the two methods can predict fairly precisely how a muscle or a joint will be affected by a particular lifting motion.

Relevant for many industries

The use of exoskeletons in the work environment is relevant for many industries. Among AAU’s partners are Siemens Gamesa, Danish Crown and Nobia, but John Rasmussen and his team have also been approached by smaller businesses.

- When a small brickwork company with 15 employees is contacting us because employees are getting sick from lifting hundreds of stones every day, that says something about the great potential of exoskeletons. I believe that we’re going to see more such inquiries, he says.

John Rasmussen also notes that it is not only industry and construction where exoskeletons will be able to make a positive difference. The healthcare sector, where many groups of healthcare professionals assist people numerous times in the course of a day, will also benefit from exoskeletons.

- I believe that in the long term, exoskeletons will become accepted and perhaps become mandatory safety equipment in many jobs, similar to helmets and safety shoes, says John Rasmussen.