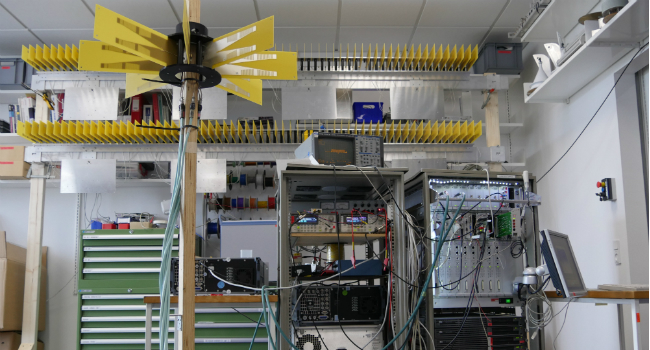 Mobile base stations for 5G solutions will consist of hundreds of small antennas. Benefits include faster transmission, improved energy efficiency, better security and wider coverage. Researchers at Aalborg University are at the forefront of developing the new antenna technology.

As we move toward a world that is increasingly interconnected with a 5G network that is expected to roll out during the next 3-5 years, the need for a well-functioning mobile network with ample room for more connected devices as well as increased data traffic becomes increasingly important.

“With the ‘internet of things’ as it is popularly known, more and more devices need to be connected,” says Elisabeth De Carvalho, Associate Professor in the Department of Electronic Systems at Aalborg University. Along with her colleagues Associate Professors Patrick Eggers, Jesper Ødum Nielsen and PhD fellow Anders Karstensen and with funding from the Chinese technology giant Huawei she is working on a new type of base system that caters to the seemingly endless increased need for data transmission.

Hang on for just a MIMO…

The system that is still in its early stages is called a ‘massive MIMO’. MIMO is an abbreviation for ‘Multiple-Input Multiple-Output’ – a wireless technology used to transmit and receive data between a large crowd of connected devices and users at the same time.

In today’s mobile base stations - the mobile antennas that we might have noticed attached to tall buildings or rooftops – each unit might have a maximum of eight antennas that point out in different directions, spreading out data transmission over a large area. But the team in Aalborg is working on a base station unit that holds several hundred antennas, making it possible to connect much more precisely to each mobile unit.

“We don’t know exactly what it is going to look like in the end. Maybe it could be a wall of a building that is covered in antennas on the outside - or on the inside. We are still uncertain about that,” says Elisabeth De Carvalho.

Adding hundreds of antennas to a base station basically increases the data transmission rate many times because the energy can become much more focused. And because focused energy is also able to travel farther, the mobile coverage is likely to improve.

At the same time, base station energy consumption is expected to drop in comparison to present day systems:

“With many antennas it is like having thin, concentrated water hoses that are aimed directly where you want them – rather than a huge, leaky fire hose that just splashes water all over the place,” explains Patrick Eggers.

“With the new technology we are not simply sending out data in all directions like a radio transmitter; we hope to be able to create a sort of virtual cable that is focused and narrow between the base station and the connected unit. We confine the space that we use for the transmission. This provides a faster and better connection.”

Confining the transmission space is not only a capacity issue. One of the added benefits of having a massive amount of antennas is that it improves the security of the data transmission.

“The more you can confine space, the harder it gets for others to listen in,” says Patrick Eggers. “When you have a broadcast you can always put up an antenna and pick up the signal if you are CIA or KGB or whatever, if you have equipment that is strong enough to decode the signal. But if you can’t get the signal in the first place it becomes really difficult. That is a major advantage for industries as well as private persons. The more you control space, the harder it gets for intruders to get in,” he says.

Prequel to a prototype

However, many of the benefits of a massive MIMO system will remain assumptions for some time to come. So far, the team has built a scaled-up model of a part of a massive MIMO array in the lab in order to do channel measurement and to figure out how to build a base station later on.

“Currently we are looking at which types of performances you can get out of a massive MIMO. The performances depend very much of what is happening in the air between your device and the base station. We want to build channel models from those measurements. The models are necessary for engineers to test their algorithms,” says Elisabeth De Carvalho. “There is a lot of research that we still need to do before we build our proto type.”

At the moment, there is practically no real life information about how a massive MIMO would work and what the wireless channel looks like, and that information is crucial to the way that the system is going to be built.

“There are a lot of assumptions and theories, but they all assume that what happens in the air goes on in a certain way, but no one really knows. Not yet, at least,” says Jesper Ødum Nielsen.