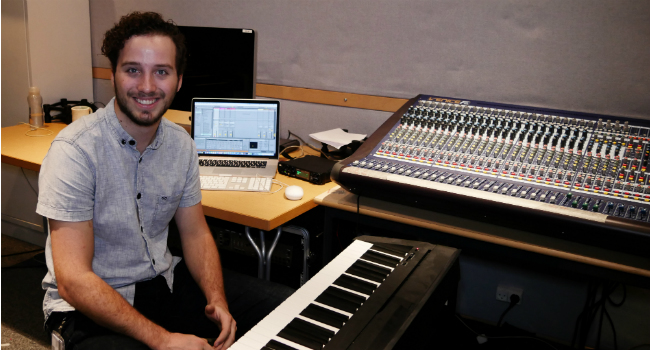 Video: Student Recreates the Sound of the Sixties with Software

PhD student Silvin Willemsen from Aalborg University, Denmark, has made an award-winning effect for music and sound production. Based on analogue models, he has developed software that replicates the classic sixties ‘plate reverb’ effect with a high level of precision.

Dutch-born Silvin Willemsen is currently working on his PhD thesis at the Department for Architecture and Media Technology at Aalborg University in Copenhagen. By using an advanced 3D model, he has created a virtual version of a classic rock music sound effect known as ‘plate reverb’ – a versatile reverberating effect that adds an extra layer of expression to music.

Article continues below the video

The sound of the Beatles and Pink Floyd

The reverb effect, ‘plate reverb’, was originally developed in the late nineteen fifties. The idea of the effect is to send music through a speaker onto a large, thin metal plate with microphones attached to it at both ends. The sound waves cause the plate to move and the vibrations in the metal become a sort of artificial reverberation.

The effect can be adjusted depending on where the speaker is placed on the plate, the size of the plate, microphone placement etc.

The plate reverb effect had its breakthrough in sixties rock music and became particularly popular owing to the Abbey Road Studios in London, which put it to use on records of the Beatles and Pink Floyd. Plate reverb is practically the only reverberating effect that is used on Pink Floyd’s 1973 ‘Dark Side of the Moon’ album.

It takes quite a lot of space and gear to create the analogue plate reverb effect – including a large, thin steel plate mounted on a rack as well as advanced speakers and microphones.

This is why programmers have spent years developing artificial recreations of the effect based on recordings and calculations of impulse response; how various frequencies vibrate when they are exposed to a metal plate of a given size. But according to Silvin Willemsen, the methods that have been used so far have their limitations when it comes to recreating the original, analogue effect.

‘Almost all virtual versions of plate reverb that have been made before are usually based on a single recording of various frequencies. This causes the effect to sound pretty static. You can’t really change the parametres in the same way as with a physical model’, he says.

However, Silvin Willemsen’s plate reverb is based on a virtual model that recreates sound vibrations much more precisely. This is a better reproduction of the original effect. At the same time, the virtual model makes it possible to change the plate’s size, thickness, density and shape, microphone placement and various other attributes by simply pressing a computer – something that would have otherwise been extremely space and time demanding or even physically impossible.

Silvin Willemsen submitted his plate reverb effect to the major AES MATLAB Plugin Student Competition for students from all over the world who work with virtual synths and sound effects. The competition was hosted by the American Audio Engineering Society in New York. Here, his plate reverb effect took home the first prize in front of many other sound and music students.

Despite the international recognition, Silvin Willemsen doesn’t expect to make any money from the award-winning plate reverb model.

‘My plan is to make it available to other master’s students, producers and sound designers so they can develop the concept further and use it as an inspiration for new and interesting effects for the music of the future’, he says.