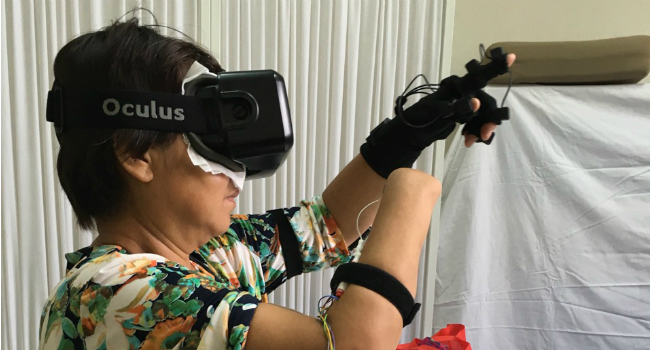 Virtual Reality can relieve the sensation of phantom limb pain. A new test devised by researchers at Aalborg University shows that VR technology can trick the amputee’s brain into thinking that it is still in control of a missing limb.

If a hand, an arm or a leg is amputated due to accident or disease, eight out of ten amputees experience a feeling of discomfort in the limb that is no longer there. The phenomenon is called phantom limb pain. Even though science has yet to come up with an unambiguous explanation, the most discussed theory concerns the sudden lack of input from the severed neural cords.

“The tactile representation of different body parts are arranged in the brain in a sort of map,” explains Bo Geng, Postdoc at the Faculty of Medicine at Aalborg University in Denmark.

“If the brain no longer receives feedback from an area, it tries to reprogram its signal reception map. That is the most common conception of how phantom limb pain occurs,” she says.

Tests have shown that phantom limb pain can be relieved if the brain is tricked into thinking that the amputated limb is still attached to the body. By placing a mirror at an angle in front of the chest you can create the visual illusion that the body is symmetrical.

If you then pretend to do the same movements simultaneously with both hands, the brain in many cases can be convinced that it is in contact with an amputated hand.

The method has proven effective in a number of amputees and is the foundation for a new method that has been developed by Bo Geng in collaboration with Dr. Martin Kraus and Master’s students Bartal Henriksen and Ronni Nedergaard Nielsen from Medialogy at Aalborg University.

Through the looking glass

By using Virtual Reality it is possible to create an experience of being present in a three dimensional world where you can move around freely, grab things and interact with them.

“The mirror therapy has some limitations because you have to physically sit down in front of a mirror, do the same movement in a confined space with both hands at the same time and keep your eyes on the mirror. The illusion can easily be broken,” Bo Geng explains. “With Virtual Reality there is a much better chance of creating a convincing alternative reality.”

In the new method the patients have to put on VR goggles and a glove. At the same time, small electrodes are placed on the residual limb, known as the stump.

By stimulating the stump with tiny electrical impulses, researchers try to recreate the sensation of the phantom hand.

The amputee plays a number of different VR games that involve doing the same thing with both hands such as grabbing a pole that has to be twisted into different shapes or pushing different virtual buttons.

In the virtual reality it feels exactly as if you were using both hands.

“Even though a person who has had a hand amputated can no longer see it, in many cases he or she can still feel it. This sensory conflict may be interpreted by the brain as pain. With this new method we try to overcome that conflict by providing an artificial visual and tactile feedback and in that way suppress the pain,” says Bo Geng.

The new approach underwent its first clinical test at the China Rehabilitation Research in Beijing last fall. Here, two out of three amputees felt their phantom limb pain ease whereas the third one experienced a decrease in the frequency of phantom limb pain attacks.

“Of course we need to do more tests, but the results so far look promising,” Bo Geng says.

At the moment the system only works with upper body amputees, but students at Aalborg University are developing a version for people who have had a foot or a leg amputated as well.