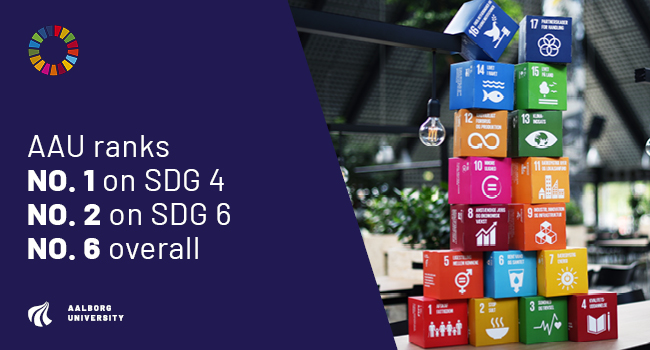 AAU among the world elite on sustainability

AAU ranks in the top ten on the most important ranking of the world's universities and their contribution to the UN Sustainable Development Goals. With first place on the goal of quality education and second place on clean water and sanitation, AAU ranks sixth overall among more than 1,000 global universities, according to the gold standard Times Higher Education.

Aalborg University is one of the universities in the world that contributes most to the sustainable transition. According to a new ranking of universities' performance on achieving the UN Sustainable Development Goals (SDG), AAU ranks sixth among more than a thousand universities worldwide.

Times Higher Education is one of the most recognized global rankings of universities, and their Impact Rankings honour AAU with a first place on SDG 4 on quality education and second place on SDG 6 on clean water and sanitation as well as an overall sixth place ahead of 1109 other universities like MIT in the US.

- I’m delighted with the fact that our researchers are being recognised for delivering top results in a wide range of disciplines, making the world more sustainable. The fact that we are again number one on quality education is yet further confirmation that we are onto something very special with the AAU problem-based learning model, PBL, and are still one step ahead in further developing it, says Rector Per Michael Johansen.

TOP RESEARCHERS AND STUDENTS WORKING ON EACH SDG

Behind the great rankings is a mass of research results and projects on each of the UN's 17 SDGs, such as goal 6 that deals with clean water and sanitation for everyone on the planet, and where AAU achieves a global second place.

Here, for example, AAU researchers are developing a DNA-based method for faster mapping of bacteria in wastewater so that treatment plants can reduce their use of energy and chemicals.

As part of the problem-based learning model, AAU students are also working specifically on achieving the UN Sustainable Development Goals during their studies. For example, two students developed a special bag that can purify four litres of drinking water in four hours using only sunlight. The “SolarSack” has been tested in Uganda and can provide clean water to two million people in East Africa.

Other AAU researchers working on SDG 6 are leaders in areas such as water purification membranes, pesticide discharge, flood prevention, and future-proofing of water infrastructure; AAU also has world-class facilities like the world's largest laboratory for analysing microplastics in water.