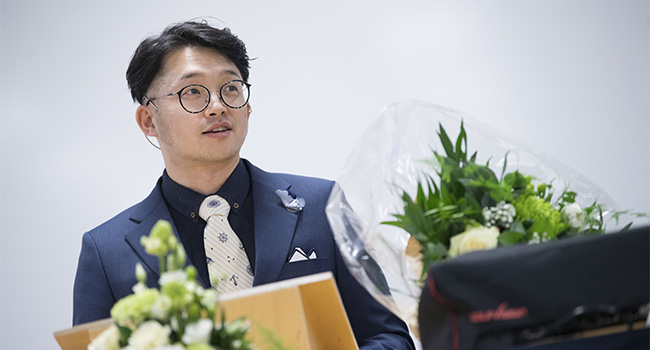 Taewoong Lee of AAU is awarded the North Jutland University Foundation’s Innovation Prize for his unique sound algorithm that creates isolated ‘bubbles’ of sound so that multiple people can listen to different sound tracks in the same room without disturbing each other.

In the future, there may be less need for headphones. Researchers from Aalborg University have developed a technique that is able to create several small zones of sound that remain self-contained in a given environment. Taewoong Lee, PhD student, has now received the North Jutland University Foundation’s Innovation Prize for this invention.

The prize was presented at the AAU PhD ceremony on 25 January where AAU PhD students were honoured for completing their PhD programmes.

‘With your approach to research, you ensure that science and the knowledge obtained are directly applicable in society and will move development in new ways. Your work is thus genuinely deserving of this recognition’, said Per Michael Johansen, Rector and Chair of the North Jutland University Foundation to Taewoong Lee.

The research team sees great commercial potential in sound zones and is in the process of patenting the technique. The technique can for instance be useful in cars so that children in the rear seats can watch movies while parents listen to the radio in the front seat, or in the home where several residents can listen to music in the same room without disturbing each other. The technique can also be used at concerts and festivals where it can prevent sound on different stages from blending or disturbing neighbours.

See the video on Taewoong Lee’s sound zones (the article continues below the video):

‘We aim to control multiple listening areas for different audio content in the same space without using headphones. This can be done by controlling a number of loudspeakers so that the desired signal for each area is heard undistorted while leakage from the other listening areas is suppressed as much as possible. This is what we call sound zone control’, says Taewoong Lee.

The Innovation Prize as a springboard

Taewoong Lee and his research colleagues at the Audio Analysis Lab in the Department of Architecture, Design, and Media Technology hope that the extra attention the Innovation Prize provides can help them develop the potential of the technology so that it can be used in the sound industry.

‘When I first heard about winning the award I thought it was a scam. But later I became more confident in our work, because it means that people acknowledge what we are working on and see all the potential behind it’, Taewoong Lee says.

The North Jutland University Foundation’s Innovation Prize amounts to DKK 50,000 and is awarded every year by the foundation board as an acknowledgement of and support for one PhD student. The student is recognised for having major innovation potential in their research area and is expected to contribute significantly to strengthening Denmark as a knowledge society. Particular emphasis is given to innovation, business potential, and solutions for specific societal needs and problems.

In addition to the North Jutland University Foundation’s Innovation Prize, diplomas were presented to all PhD graduates from 2018. AAU’s new PhD graduates total 196 and represent 5 continents and 30 nationalities. Of these, almost 80 attended the PhD ceremony with their closest family and friends. Taewoong Lee brought his wife and their six-month-old child.

Facts: Board of the North Jutland University Foundation:

See more pictures from the PhD ceremony and the presentation of the Innovation Prize: