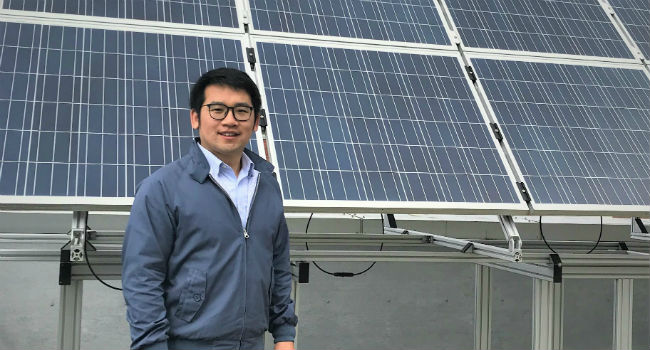 Enabling More Solar Energy in the Grid with Better Control

The power generated from solar photovoltaic (PV) panels is fluctuating. This poses a big challenge to the existing power grid in terms of frequency and voltage stability. A researcher at Aalborg University has developed strategies for controlling the fluctuating power of solar PV systems so that in the future, we can ensure a higher proportion of solar energy in the grid in a friendly way

It is difficult to predict when and how much the sun will shine. Hence, there will typically be large fluctuations in the production of energy from solar PV panels/cells, which is a challenge for our existing power grid that has been accustomed to a stable supply of energy from fossil fuels. Yongheng Yang, Associate Professor in the Department of Energy Technology at Aalborg University, has examined how to better control the entire system so that the solar energy integrated into the power grid at the converter stage does not negatively affect the network stability. With smarter controls, it, in turn, will be possible to bring more solar energy into the grid, creating greener electricity for consumers.

The control strategies are described in "Power control flexibilities for grid-connected multi-functional photovoltaic inverters," the scientific article for which Yongheng Yang recently received the 2018 IET Renewable Power Generation Premium Award (Best Paper).  The award recognizes the authors of the best articles published in the journal in the past two years.

A regular supply of energy maintains the stability

- Although we would like to bring as much solar energy as possible into the grid, we may have to prevent all the energy from passing through the converter stage so that we may not challenge the power grid that becomes unstable due to too much fluctuating energy, Yongheng Yang says. He adds, in order to ensure the stability of the entire power grid, we need to be able to flexibly control the production when it is necessary, for example to reduce or save energy from solar PV panels. This will enable or maintain the stability of the power grid.

- When we lose energy in the conversion stage, the loss leads to heat because the resistances of the components get hotter. And the more the energy loss, the more heat, and this may eventually burn out the converter. The aim is therefore not only to get more energy out of the process, but also to ensure that the converter will be more reliable and can thus increase the total operation time of the system, says Yongheng Yang.

With increased system operation time, the owners of the power grid and solar PV panels take in larger profits, and ultimately this could mean cheaper and greener electricity for consumers.

Today, the technology in the conversion stage is so good that only five percent of the energy is lost. However, this can be even better.

- I’m working on utilizing the last five percent so that we get the most out of the energy and out of the system. In the big picture, this can help make our communities greener and more sustainable, says Yongheng Yang.

Download the "Best Paper" article for free at http://dx.doi.org/10.1049/iet-rpg.2015.0133. Also, Yongheng Yang recently published the book – Advances in Grid-Connected Photovoltaic Power Conversion Systems which he coauthored with Katherine A. Kim, Frede Blaabjerg and Ariya Sangwongwanich. The book summarizes the control strategies with more discussions on future grid-friendly energy conversion systems from solar PV panels. The book is available at https://www.elsevier.com/books/advances-in-grid-connected-photovoltaic-power-konvertering-systemer/yang/978-0-08-102339-6.