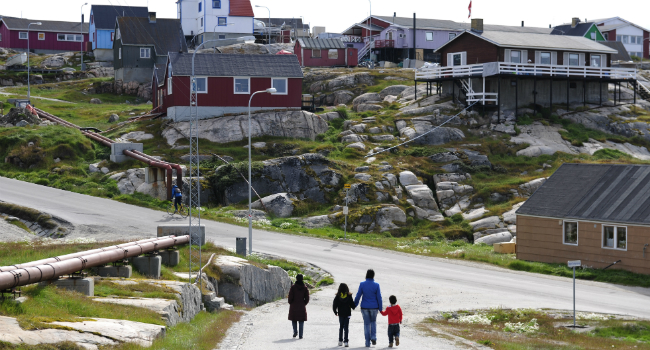 Facebook Can Give Young Greenlanders a Much Needed Voice

Public meetings are the most common way to involve citizens in Greenland, but young people don't show up. Facebook can help to remedy this, according to an AAU researcher

Although Facebook is currently getting a lot of criticism, the social media platform has its positive sides. At least it can give young people a voice in the debate on the future of Greenland, something that is needed in a country with great distances and a scattered population. So says Arctic researcher Anna-Sofie Skjervedal who is affiliated with both Aalborg University and the University of Greenland (Ilisimatusarfik).

Middle-aged men the most active

When the people of Greenland are to be heard, the most commonly used method is to convene public meetings. Anna-Sofie Skjervedal’s research has examined public meetings on mining projects in northern Greenland, and the result speaks for itself.

– You do not get the entire population; a very narrow segment of the population is represented, and that is thought-provoking, she says.

– Results from my research show a gap between politicians' visions of the role of Greenlandic youth in the future and young people's own aspirations, including what role they see for themselves. Politicians and authorities lack general knowledge about who young people are in today's Greenland and what their assumptions, values and objectives are in relation to the targets that are being set for them politically.

According to Anna-Sofie Skjervedal, decision makers need to be closer to young people if societal development is going to hang together in a sustainable way. And that requires new thinking.

- It is important to have multiple methods in play that complement each other instead of just holding public meetings, she says.

And that’s where Facebook comes into the picture. The social media platform has proven to be a useful method of involving and engaging young people, thus giving politicians and authorities the insight they lack into young people's lives.

In her research project, she invited 80 participants through a closed Facebook group to post pictures and relate to a number of themes about their lives and values: "Interests and values," "Hopes and dreams," "Fears and concerns," and "Visions for the future."

– Facebook is a platform that young people know well. And taking a picture and adding a text is something most young people are already used to doing.

Facebook turned out to be a useful communication platform, also in terms of the geographical challenges in Greenland. Anna-Sofie Skjervedal gained substantial insight into young people's thoughts and visions, which included concerns about a future Greenland with economic decline and relocation abroad, but also desires for competent adults, educational opportunities and new challenges.

If we want a deeper dialogue with young people, however, other methods must also be used.

– So it is important to meet them face to face, or use an online video platform to interview them later, emphasizes Anna-Sofie Skjervedal, who hopes that her research can broaden perspectives on the concept of citizen involvement.

This summer, Anna-Sofie Skjervedal will defend her PhD dissertation: "Breaking the Frame of the Current Public Participation Practices in Greenland: A Visual Anthropological Approach to Meaningful Engagement”.