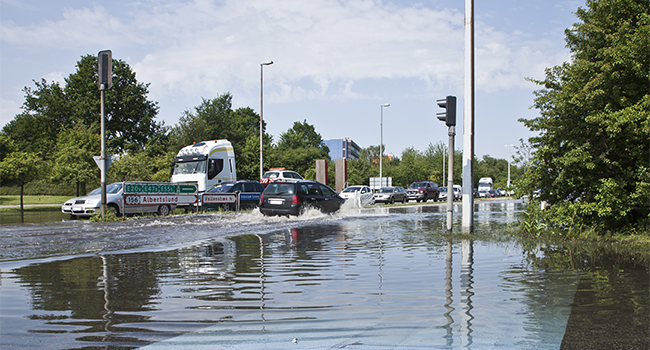 Researchers from Aalborg University aim to combine mathematical models with machine learning in an attempt to control water in cities. The aim is to make certain the water does not end up in the wrong place at the wrong time.

Water is one of the biggest challenges in the world. Some places get too much rain. Some places get too little. Drinking water may be contaminated or be in critically short supply. Water is, not without reason, the basic element of four of the UN’s Sustainable Development Goals. But in and of itself, water is neither good nor bad – the challenge lies in making certain that water is at the right place at the right time, and of a certain quality.

In a new project named CLAIRE, researchers from the Department of Computer Science and the Department of the Built Environment at Aalborg University will attempt to improve the possibilities for understanding and controlling water in urban areas. The project is one of three for which Aalborg University has received grants from the VILLUM FOUNDATION’s new Synergy Programme.

– Being able to control water is a crucial element of the solutions for many of the issues that the SDGs are targeting. But when it comes to optimizing current water management, we do not at this time utilize the potential that digital technologies offer. Our claim is that a digital approach will allow us to measure, control and regulate water intelligently, and we will attempt to combine existing mathematical models for how water behaves with more data-driven machine learning. By doing so, we can control water and, for instance, prevent the number and extent of floods.

A complex game with a complex opponent

In the project, the water system is seen as a cyber-physical system, in the sense that it consists of a physical reality – the water itself and the infrastructure – that is monitored and controlled by connected software and/or hardware units. In the project, the researchers will use the tool UPPAAL Stratego for developing models of how the water and, not least, the flow of water may be controlled. UPPAAL Stratego is a further development of the tool UPPAAL that is used for simulating, testing and verifying systems. Kim G. Larsen compares it with playing chess – with the water in the system as your opponent.

– Understanding how the water flows through a system is one thing. But we want to be able to open and shut off the water at certain places and times. Earlier, we have used UPPAAL Stratego for controlling traffic and floor-heating systems, but now we will be using it in an entirely new domain: Controlling water. And we are very much looking forward to that, he says.

In practice, the researchers will be working on a real-life case – a rainwater basin. Rainwater from cities is gathered in drainage basins and slowly released into natural waterways in a constant, static flow. But the question is whether it would make more sense to release more water at certain points in time, and less at other points in time. And how does the flow from one rainwater basin affect other rainwater basins that are also releasing water into the same waterways?

– The basic idea is that we will first set up and test our models, and the next challenge is to show that this is what actually happens in the real-life case. We need to constantly be able to predict all imaginable outcomes. But what makes the game especially complicated is the fact that water molecules are continuous phenomena. There is an element of uncertainty – we do not know with 100 percent certainty that it will start raining in ten minutes. It is a highly complex game – and we are playing against a complex opponent, says Kim G. Larsen, and adds that the researchers are also aiming to build a digital representation of a more complex water system that they can model and play against – a so-called digital twin.

In addition, the researchers need to make sure that they can count on the chosen control strategies. They need to be absolutely certain that a flood will not happen if one of the sluices in the system is opened too far.

– There are of course several critical situations that we need to avoid. We want to be able to offer absolute certainties – and that is a challenge. So we also need to make sure that some elements carry a higher importance than others in the models, says Kim G. Larsen and continues:

– On the other hand, we also need to remember that water is harder to model and control than for instance traffic, where we have radars to tell us exactly how many cars are on the road. It is impossible to monitor every single aspect of a water system. We will only have access to some partial data on the state of things, and then we will have to estimate the rest. But who knows – maybe it will turn out that we only need a tenth of the number of sensors and still be able to do a good job?

Project: CLAIRE: CONTROLING WATER IN AN URBAN ENVIRONMENT is funded by the VILLUM FOUNDATION with a grant of DKK 2.9 million.

About UPPAAL: The world-famous verification tool UPPAAL was developed at the Department of Computer Science, Aalborg University, in collaboration with colleagues at Uppsala University.