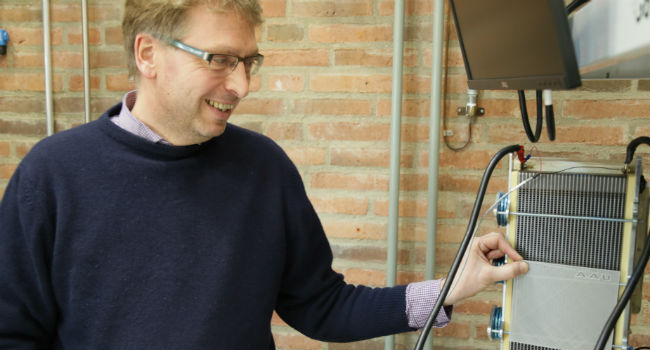 A plastic grid that costs less than a dollar to produce can increase the efficiency of an air-cooled fuel cell stack by over 30 percent, as demonstrated by research from Aalborg University

TurbuGrid is the name of a small plastic grid approximately 16 x 16 cm that can markedly increase the efficiency of an air-cooled fuel cell stack. Tests by AAU researchers show an increase in efficiency of at least 33.5 percent, but this may be even greater if the grid is added to entirely new fuel cell stacks. The increase is due to the fact that the grid adds turbulence to the air flowing into the channels in the stack. Turbulence has a major effect on the heat transfer that occurs in fuel cells, and this has important implications for how high a power density can be achieved from the fuel cells.

We would like to have the fuel cell operating at around 50-60 degrees because the reaction between oxygen and hydrogen has the best conditions at that temperature. So we need an effective method of transferring the waste heat that occurs inside the fuel cell so that the cell does not overheat, says Torsten Berning, Associate Professor in the Department of Energy Technology at Aalborg University.

The air drawn through a fuel cell stack flows in a laminar manner (the opposite of turbulent). But researchers from Aalborg University have now  found out that by adding artificial turbulence to the airflow by using the small plastic grid can increase heat transfer to the air and thus ensure increased efficiency because the fuel cell does not get too hot.

Adding artificial turbulence to airflow is a radical change in the approach to getting more from a fuel cell stack. This is due to the fact that previously the focus on achieving greater efficiency centered on avoiding a pressure drop and not on more effective heat transfer.

Previously, researchers and industry aimed to create an airflow that was as laminar as possible. But our research shows that it is much more about ensuring effective heat transfer, and this can be achieved by adding turbulence, says Torsten Berning.

The more power, the more heat

The more power extracted from a fuel cell stack, the hotter the stack becomes. That is why it is important to achieve better control of the temperature inside the cells. With laminar air flow, heat transfer is relatively poor, and this limits how much power can be extracted from the fuel cell stack.

If we are not good at controlling heat transfer, the stack will quickly get too hot, and we cannot extract as much power as there actually is potential for. But by adding turbulence we see significant results in terms of ensuring efficient heat transfer to the air – and thus also a marked increase in fuel cell efficiency, says Torsten Berning.

Everything inside a fuel cell is so small, making it difficult to calculate and measure the temperature accurately. Torsten Berning and his research colleagues thus used computer models in combination with physical experiments. And the results from both the models and reality were clear: a marked increase in efficiency and output power when the grid is added. 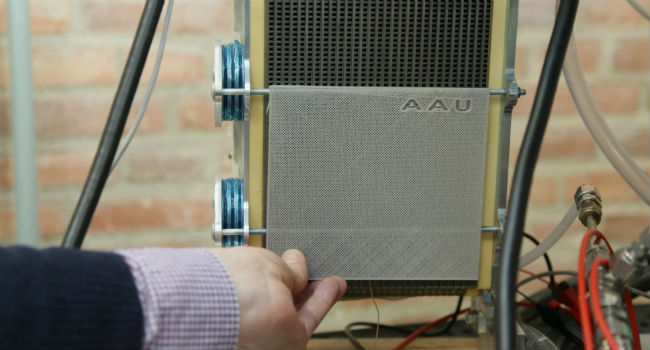 The air-cooled fuel cells are currently being used in material handling with forklifts, as emergency power plants for IT and the telecom industry and for smaller drones. Fuel cells typically last 5-6 years, depending on how they have been operated, but by adding the grid to a fuel cell stack it will it be possible to extend service life because the temperature in cells is controlled in a more appropriate manner. An air-cooled fuel cell stack costs at least $1000/kW, so in addition to using the grid on the new stacks, it can also be a good business to add it to the fuel cell stacks already in operation.

Aalborg University and Torsten Berning have applied for a patent on the invention and are now seeking industrial partners who are interested in future collaboration. The project behind the invention TurbuGrid is supported by the EUDP (Energy Technology Development and Demonstration Program).